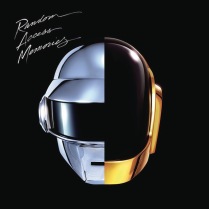 So after all the hype, all the tweets, the Vine videos, the YouTube campaign, the viral videos and the build up Random Access Memories was released this week.

I didn’t listen to the streamed version on iTunes as I had preordered my copy of the new Daft Punk album and wanted to enjoy it.

Sadly I wish I had listened to the streamed version as I would have cancelled my order!

I have listened to RAM three times now and unfortunately for me it does not grow on me at all.

I cannot find a thread through the album and the eclectic style does not do me any favours as a listener. It starts off well enough but then dips to a slow melodic plod. Throw in the pointless interview with Girgio and I cannot but wonder what Daft Punk were trying to achieve.

I get it that the songs are a collection of memories from the robots, strung together loosely but it simply does not work.

On first listen I feel asleep during Get Lucky (which is much better than the radio edit) and when I woke up at Contact I honestly thought it was all one track.

There is an awful lot of repetition in the album and although this usually plays for Daft Punks strengths I just feel that they have over done it.

Some tracks are laboured and tired and just don’t seem to go anywhere.

Songs such as Fragments of Time really do try to get the party started but it just becomes a repetitive melody.

Contact is a nice idea but I feel it’s been done already by the likes of Lemon Jelly with Spacewalk and countless others.

Touch is the perfect example of where it all goes wrong – it tries to be a dance hit, it tries to be acoustic but it’s mix with acapella lyrics, odd sound effects distorted tones and random synth patterns. Daft Punk please decide what each track is and bloody stick with it!

I can see what Daft Punk were trying to achieve with the 70’s riffs etc but it feels like this was an experiment which never really got going. None of these songs are very dynamic and just don’t seem to go anywhere.

Of all 13 tracks I have only star rated two or three (Get Lucky, Fragments of Time and Don’ it Right) the rest I am sad to say will be confined to the great pop dustbin that already includes Human After All.

I so wanted this to be a great album but it’s not and I cannot see how I can make myself like it. I tried to listen to it all on the train home (well I did), but there were several occasions where I just wanted to switch it off.

Of course I’ll be flamed for my review and the twitterati are loving this but I hate to think it’s all young kids who have not heard anything quite like this before (see my post on the 20th anniversary of janet.). I really don’t find it at all encouraging or listenable.

A lost opportunity for Daft Punk and an album that has been marketed beyond its actual value.

For those who love it – good for you. I just hope you haven’t been sucked in on the promise of one track, the marketing and the fact that it’s “a new album by Daft Punk”.