I have been thinking about how I capture my photos and what I share. This led me to think about the process and sharing what goes into what I do. Everyone likes to see the final product but how do I get there?

Acquiring the Olympus Trip 35 has made me think differently about how I approach my photography and it’s a good thing.

All through my course I realised that I take shots (or multiple shots) then go check the best in post production.

It’s not fool proof approach and even though I capture lots of great images, it means I’m not really looking at what I’m shooting.

I do look. I do compose and I do study my subjects but sometimes there’s an element that isn’t right or I could have composed better. I often see this once the photos are imported to my computer.

Being restricted to 36 exposures and black and white film has really made me think.

I’ve used the Trip on various locations for the past couple days and I have captured half the shots from the film. Sounds a lot but by comparison, if I used my DSLR I’d have hundreds of images. (In fact I tried image stacking this weekend and indeed 200 shots equated to 10 photos!).

It’s also refreshing to not know what I have. I have an idea. I know what I planned but how did I do? How did the camera perform?

Of course this isn’t to say I didn’t stop to capture some photos on my phone. Why wouldn’t I? It’s not every day I take the time to have a break in my day nor is it every day I get to visit the Tate Modern.

Something inspired me so I decided to take a photo or two to capture it.

I did plan the shots and I did look at what I was taking before I took them. They’re not all great but you have to practice. And strike when inspiration does.

I didn’t use the Trip for these shots as some were in very low light (it has no flash and I’m not sure about the light meter yet). Plus I was experimenting with a couple shots so didn’t want to waste film.

I wonder how successful Instagram would be if you had to print and scan every shot before uploading?

I find it thrilling to see how many likes and stars my photos get but what I really want (and possibly crave) is feedback.

This is why I am going to write more about my photography. I enjoyed writing about running but I mostly enjoyed the feedback and the conversations I had with people about my experiences and my progress.

This is not to say I will stop writing about running. Far from it.

It’s also not saying all I want is criticism either!

I simply feel I can use this blog to stronger personal and creative effect. Whether you find this interesting remains to be seen but like the running entries, it’s a form of diary and record for me.

I had thought about resurrecting my podcast or video cast but that’s a lot more commitment and there’s many others already out there doing a much better job than I could.

Maybe I don’t think they’re worthy additions. Maybe I don’t feel confident in my work. I’m not entirely sure but subconsciously I find that really interesting.

This photo “Beats” is of an installation at the Tate Modern in London. It’s one of the photographs I captured with my phone camera.

I’m ashamed to say I didn’t stop long enough to find out its title nor the artist. I was more interested in the tower of stereos and radios and the random sound they were all omitting.

I thought it made for an interesting and moody composition.

It’s had very little tweaking from the original shot (the Pixel 2 camera really is that good). I’ve simply put the shot into Lightroom and increased the blues and decreased the reds. That’s it.

I think it is a striking image (and have made it the wallpaper for my phone).

What do you think? 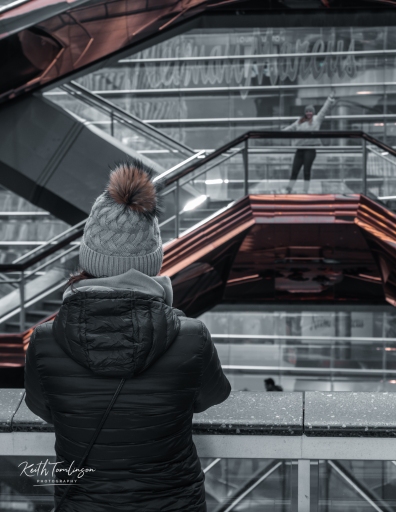